My breast, my flag, my right

The action “My breast, my flag, my right”, by Indianarae Siqueira, questions legislation and provisions that insist on controlling bodies, especially non-normative ones. This aesthetic-political action of direct confrontation consists of exposing the breasts in public places, and provokes reflection on gender inequality in the legislation, questioning both the repression against women and the lack of recognition of trans people’s identity. In Brazil, a woman showing her breasts in public is considered a crime. By exposing her breasts and being detained by the police, Indianarae argued that they would have to arrest all shirtless men because she was legally a man. “If they condemned me, they would be recognizing me as a transgender person and setting a precedent for all trans people to be respected for their gender identity. At the same time I would be condemned as a woman, clearly saying that men and women are not equal towards the law,” says Indianarae. This action has been carried out 13 times since 1995, when Indianarae, with the support of Jovana Baby Cardoso, the matriarch of the organized movement of transvestites and transsexuals in Brazil, exposes her breasts on top of the trio during the 1st LGBTIA+ parade in Rio de Janeiro. Since then, she has been detained in Santos-SP for toplessing at José Menino Beach, and in Rio de Janeiro she was approached eight times, being brought to trial. The case was archived due to its complexity. Here in Compa, we document the action during the 2012 Sluts Walk in Rio de Janeiro. (Text produced in partnership with Tropicuir).

My breast, my flag, my right 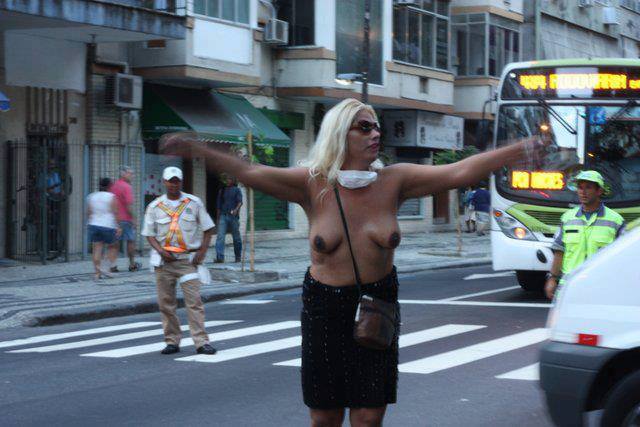